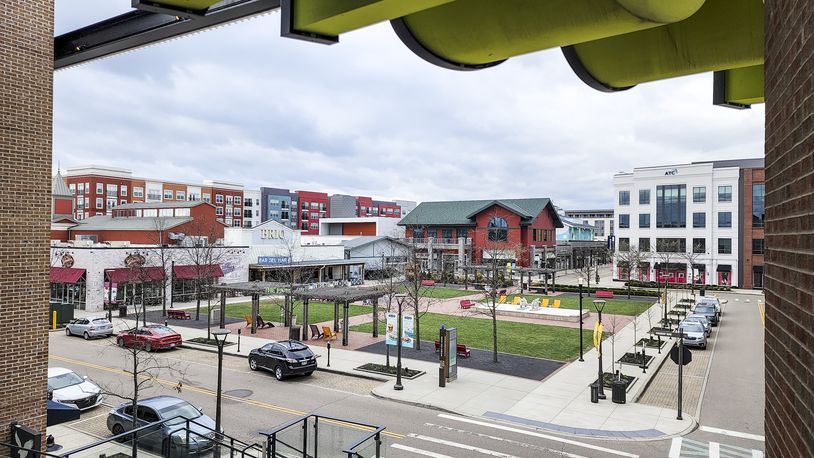 LIBERTY TWP. — Like most brick-and-mortar retail outlets, Liberty Center has struggled mightily throughout the pandemic and even before, but management says they refuse to quit and are working to retool the center to guarantee future success.

The $350 million mega mixed-use development opened in October 2015 on 65 acres in Liberty Twp. off Interstate 75. It has a range of retail, shopping, dining, living and office space and entertainment venues.

Steiner + Associates developed the project that was touted as a one-of-a-kind destination, and it is now owned by Apollo Commercial Real Estate Finance Inc. and run by Bayer Properties. The center, like the rest of the world, was crippled by the COVID-19 pandemic. General Manager John Taylor said they did everything they could to help their tenants during the shutdown.

Apollo has invested roughly $10 million in an effort to keep existing tenants and make changes to the center to deal with the new normal.

“What’s happened in retail, the change has accelerated so quickly, so quickly and a lot of that is because of COVID,” Bayer President Libby Lassiter told the Journal-News. “Apollo is having to reinvest in the property, seven years into it, with significant dollars to make changes to what is now current, is now the next new thing, that’s highly unusual in a retail shopping center.”

Taylor said they have given rent relief to existing tenants and Yavonne Sarber, owner of Agave & Rye who has multiple locations, said Liberty Center was the only landlord to offer a rent break — and “it was huge for us.”

Part of that strategy is bringing in more office tenants and apartments. Apollo recently applied to Liberty Twp. for “major modifications” to the development plan, for a four-story, 273-unit apartment building and two restaurants, that depart from the original development plan.

The trustees denied the apartment building but approved the Shake Shack — that is a casual dine-in restaurants with a drive-thru — and Torchy’s Tacos restaurants — both new to this region — as well Optima Dermatology in a nearby, two-story structure.

Trustee Tom Farrell told the Journal-News there are already about 1,200 new apartments being built in the Liberty Center corridor — doubling what is there now — and “nobody can tell any of us when is too many … too many.” He said they need to see how those high density units are going to impact the area before they approve more.

Trustee Steve Schramm agreed they need to see the impact of all the new housing already in progress, but he also didn’t like location and didn’t agree with their parking studies. Apollo wants to locate the apartments near the hotel and in a location where retail was originally imagined. He said he met with them after the fact to discuss the proposal.

“I explained my logic that I wouldn’t necessarily be against it but I didn’t like where they were putting it for one,” Schramm said. “They were plunking it right down in probably our most vibrant part of the mall, by the restaurants and the cinema and hotel.”

He also said “I felt like we were getting buffaloed” by their parking studies because they wanted to take about 200 spaces in the parking garage that is already overflowing at times. He said people would have walk about a “half mile” to get to the center of the complex.

He said he understands the old vision is no longer viable but told them he wanted some sort of a master plan.

“You’ve got 800,000 square feet of retail right now, how much do you think is the right amount?” Schramm said he told them. “I got an answer, but I’m not sure it was a well-thought out answer. I don’t know that anyone has really decided; we’re just in a semi-panic mode where we’re going to just throw stuff against the wall and hope that enough of it sticks to make things work. That’s not a good vision to me.”

Taylor and Lassiter said the entire region is “over-retailed” and bringing in housing will only serve to fuel business for all of tenants at center, especially since people can walk to shop, eat and entertain themselves.

Taylor said he is in the process of providing the township more information about the new vision for the trustees that “they’re going to find helpful and not question, and then they can make a better educated decision is what out hope is, because the reality is if you look at similar successful projects like Liberty Center, most of them have either more office or more apartments which help drive that traffic.”

The occupancy rate at the center is around 80% but that does not include all the new leases in the works. Since 2021 they have sealed 36,000 square feet of new deals like the Son of a Butcher restaurant and Shindig Park event center that just opened and are first-to-market; Sandbox VR a virtual reality concept and 10 deals with local businesses: AKT Fitness, McK’s BBQ, Taste of Belgium, Willow’s Home & Gifts, Brow Envy, ERA Real Estate, Sandwich Café & Deli, Cassington Hair & Co., Pen + Nash Co. and Realty One.

Help was on the way

Last year, the county commissioners and the trustees worked with Apollo for months, trying to work out a deal that would bolster the finances of the center during bleak retail times. Those talks ended with no agreement.

Part of the negotiations included the county offering to pay the center $6.8 million over six years in lieu of Apollo seeking property value reductions. Liberty Center applied for two value reductions — totaling $73 million — one of the mandated 2020 reevaluation and a second taking advantage of a new law that allows companies to seek relief based on the negative impacts of the coronavirus pandemic.

The Butler County Board of Revision — which is an independent board under the county auditor’s office — approved property value reductions for both, first a $14 million reduction last summer and another $15 million due to COVID.

Mike Stein, tax accounting manager for the county auditor’s office, said with a new retail portion value of $109 million, Liberty Center will save about $623,502 in taxes with the reduction. Liberty Center wanted the value dropped to $65 million which would produce a $931,174 tax savings. The BoR decisions are on appeal with the state.

Commissioner T.C. Rogers told the Journal-News at the time Apollo was legally within its rights to pursue the tax break but “they can’t have both.”

“We had come up with an alternative which we thought would help with their cash flow by giving them money,” Rogers said. “What we offered they countered with wanting more and for a longer term, and then they offered several counters. So we had said a month ago what we had come up with was a final communication and they countered that, so we decided there’s no more to discuss.”

Rogers said the county’s big concern with the property value reduction is it could impact repayment of the $49 million in infrastructure bonds and loans floated to support the development.

County needs to protect its investments

The Liberty Community Authority was formed to serve as a watchdog over the taxpayer investment in the development. The LCA is responsible for maintaining garages and storm water systems at the center and paying off the debt to build those. It uses several assessments to repay the debt, including a 10-mill assessed value charge levied against the properties on the site, which will be impacted by the value reduction.

There have been some issues with the bond payments in recent years for a variety reasons, necessitating “loans” from the county tax increment financing district. The main problem appeared to be miscommunication when former retail leasing and management company JLL handed the reins over to Bayer in 2019.

At issue was the fact that the LCA has had to borrow money, about $600,000 over the past several years, from the county’s financing district account to partially cover debt payments. The shortfall was due in part to the COVID-19 sales slump and other factors, according to Brad Ruwe, the board’s bond counsel.

The county Tax Increment Financing district was always supposed to be used to cover some of the debt payments.

The LCA, the county and township recently refinanced the $37 million in bonds they issued in 2014 and restructured the $12 million OWDA loan. So the LCA will realize an estimated $340,000 annual savings, the county around $90,000 and the township about $58,000.

LCA Chairman Phil Morrical and his board have had a lot of angst over the financial woes but he said he is now feeling “very optimistic.”

“The income derived from sales last year was the best for the complex since it opened. People may have had a fever to get back out and start spending and held off, but the trend was very good, December was excellent,” Morrical said. “We’re very optimistic, we’ve got new users coming in there, a lot more interest, there’s definitely a lot more people in the complex, that alone is a good indication.”

The debt payment “waterfall” was also adjusted so the county TIF is not the first funding source tapped when there are shortfalls.

In addition to the 10-mill assessed value charge the LCA uses a facilities charge of one-half of one percent, which the public pays during each transaction at a Liberty Center business, and a core retail charge which certain tenants agreed to pay when they signed leases with Steiner.

County Administrator Judi Boyko said under the retooled development agreement, if there is a debt payment shortfall, Apollo will have to make up the difference, but will be repaid the next year out of the core retail charges.

The county also has a minimum value guarantee and if the value drops below $192.5 million the owners must pay the county a service fee.

Boyko said she believes due to the property value reduction Apollo received, they will end up having to pay the guarantee but doesn’t know that amount yet.

Despite the recent issues — many beyond anyone’s control — all the key players involved say Liberty Center was a good investment of taxpayer money.

Commissioner Don Dixon said the project “has been a magnet” for all the new development around it and “at the end of the day Liberty Center is and will be a great asset to Butler County.”

Farrell said although they nixed the last idea, they will find a workable solution.

“Liberty Center is certainly not what it was planned to be, our world has changed,” Farrell said. “But I’m confident it is adjusting as it meets today’s and tomorrow’s needs and it can exceed the original expectations and I believe it will.

Taylor said when he got here at his first tenants meeting he told them “there is no immediate solution coming to save Liberty.”

“It’s going to take some time to get there and what we have to do is make sure the tenants we have can survive until that time gets here, so that everyone can benefit from Liberty becoming successful,” Taylor said. “I didn’t move, and become a part of this community with my family for Liberty Center not to work. And Liberty Center needs the work from me, it needs the work from the county and the township, and all of our tenants who are there, and the residents obviously of Butler County and surrounding areas because no one wants what the alternative is.”

Liberty Center by the numbers